The 1928 Denver Auto Show
celebrating the opening of the Moffat Tunnel.

David Moffat envisioned a more direct railroad line between Denver and Salt Lake City through the Rocky Mountains and spent his life's fortune to see it built.  Begun in 1902 and costing over 14 million dollars, the Denver Northwestern Railroad went bankrupt in 1911.  Just keeping the snow removed from the rails over Rollins Pass had greatly impeded the financial success of the line.  The only viable solution was a tunnel under James Peak to eliminate this portion of the road.  Many thought the dream of a tunnel died with the passing of David Moffat on March 18, 1911.  However, the company was reorganized as the Denver & Salt Lake Railroad by William Freeman in 1913, but it would take a decade before work on the Moffat Tunnel could begin.
In 1925, as the tunnel reached the half way point, a film crew from Metro-Goldwyn-Mayer came to film "The White Desert" at Rollins Pass.  The film stared Claire Windsor, Pat O'Malley and Robert Frazer and dramatized the perils of keeping a mountain railroad route open through the harsh winter months.  The film was used to promote public support for the completion of the Moffat tunnel and today, the film is an important historical document of the steam locomotive days.
As completion of the tunnel drew near, Sunday, February 26, 1928 was set as the official date for the opening ceremonies.  The date was chosen to coincide with the 1928 Denver Auto Show which celebrated the latest advancements in transportation.  The full impact of the new tunnel was realized the night before ribbon cutting ceremonies when a 74 car freight train pulled by 3 locomotives made a test run through the 6.2 mile tunnel in just 30 minutes.  In comparison, the journey over the old route would have taken 10 locomotives between 9 and 11 hours to complete.
A special, four section train with 2,500 people was scheduled as the first passenger train through the tunnel.  Tickets for the inaugural trip sold out completely.  E. N. Burdick, a pioneer Denver attorney, invited 100 people who had personally known David Moffat to take the trip, to pay a posthumous tribute to the man responsible for the tunnel which bears his name.  Each passenger was to sign the special ticket stub and these in turn were collected during the trip and placed in a time capsule with newspaper accounts of the event and sealed in a niche in the tunnel a week later.  According to plan, this time capsule was opened on the 50th anniversary in 1978.  About 400 passengers on the Rio Grand Zephyr and an estimated 600 others were in attendance to witness the event.
It was a bright and clear February morning when four trains left the Denver train station for the Eastern Portal of the Moffat Tunnel.  The trains left at 8:40 and arrived at the mouth of the tunnel at 11:30.  Special preparations allowed the historic event to be broadcast live by the Denver Radio Station KOA.  As the dignitaries took their place, they were greeted by the Governor of Utah, George Dern.  At 12:15, Reverend Charles Marshall began the ceremonies by giving the Invocation.  To ceremonially complete the road, a golden spike was then driven by ex-Governor Oliver H. Shoup and the current Governor, William H. Adams.  Then, the tunnel was formally turned over to the Denver and Salt Lake Railroad by William P. Robinson, president of the tunnel commission, to W. R. Freeman, the president of the railroad. Back in Denver, a salvo of six “bombs” in rapid succession from the roof of the Rocky Mountain News building announced to the world not listening to the radio, that the tunnel was officially opened.  A series of short addresses followed by ex-Gov. Shoup; ex-mayor of Denver, Dewey C. Bailey; the mayor of Salt Lake City, John F. Bowman; and the mayor of Denver, Benjamin F. Stapleton.  After publicity photos were taken, the trains were re-boarded and at 1:20 began their 30 minute trip through the new tunnel.  When the entourage emerged on the other side of the James Peak, 6 more “bombs” pierced the air in Denver in celebration. 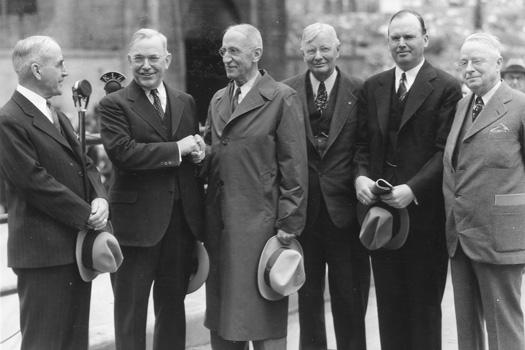 April 26th and 27th 2019 in Downs, Kansas.
kansasstorytelling.com
Monday morning, February 27th saw a flurry of activity in preparation of the grand opening of the Auto Show later that evening.  70 display cars had to have their gas tanks and crank cases drained as well as their batteries removed as a fire prevention measure and manually rolled into position on the exposition floor.  An overflow of another 15 cars had to be displayed in the Venetian Gardens at the nearby Shirley-Savoy Hotel.  Outside the auditorium, the crowds were forming for the arrival of the queen of the Auto Show.  A semicircle of impeccably polished cars lined the Union Station concourse.  In the middle was a float to transport the Denver Theater jazz band surrounded by a squad of mounted police.
Punctually at 10:15, a train arrived at Union Station and immediately a series of canon shots were heard emanating from the roof.  As M-G-M silver screen star Claire Windsor and her traveling companion Ann Alvarado emerged from the train, Claire was presented with a huge bouquet of American Beauty roses by a greeting committee which included the Denver Mayor, Benjamin Stapleton; the business manager of the Rocky Mountain News, J. L. Cauthorne; and the Chief of Police, Robert Fred Reed.  Lou Forbes’ 16-piece jazz band performed as 12 uniformed pages from the Denver Theater formed a guard of honor to escort Claire through the train station and out to her waiting La Salle automobile.  Several Paramount Newsreel cameramen were on hand to document the event with moving pictures.  The assembled clips were later shown in the local theaters.
First in line of the parade was a squad of Denver mounted police headed by Sergeants Sullivan and Wolff which was followed by the stage band on their float playing “Ain’t She Sweet.”  As they headed down 17th street, Claire’s car pulled into position and the crowds began to cheer.  Following behind her, a train of fashionable automobiles sparkled like gems in a necklace.  Flying overhead, Capt. Lewis Goss and Lieut. Danny Kearns from the 120th observation squad of the National Guard, showered the parade spectators with flower blossoms.  The parade traveled fourteen city blocks to the entrance of the Cosmopolitan Hotel.  There, Claire’s car stopped and she was greeted by Lou Goldberg, owner of the Denver Theater, and was presented with more flowers and then escorted to her rooms, the Montmartre suite.
At 7 p.m. the doors of the Denver City Auditorium were opened and the first visitors to the 1928 Denver Auto Show were admitted.  Along the south wall, the mountain range through which the Moffat tunnel was carved, was artistically recreated in three dimensions at balcony level.  Even Corona Pass and Berthoud Pass were faithfully represented.  In the center stood James Peak with a scaled representation of the Moffat Tunnel entrance at its base.  Beneath this, at floor level, stood a large portrait of David Moffat.  A huge pine cone was suspended from the center of the auditorium from which radiated a blue sky of streamers.  500 fresh pine trees added a fragrant sense of realism to the panorama.  Dimmable floodlights were manipulated to imitate the rising and setting of the sun.  Each of the exhibitors had a white, T-shaped pedestal across which the name of the firm was lettered, draped in garland and topped with a silvered pine tree.
At 8 p.m. the manager of the auto show, Tom D. Braden, introduced Mayor Benjamin Stapleton who formally opened the exhibition.  Then Claire Windsor, wearing a white ermine coat, and Chief Lone Eagle in traditional clothing, were both welcomed and introduced to the audience.  After formalities, the rest of the evening was spent mingling with the crowd and inspecting the exhibits.  Among the most popular exhibits was a motor with portions cut away to show the working parts.  The poplar trend in new cars was clearly toward the fully enclosed models.  The adjustable driver’s seat was a new, practical innovation which caused quite a sensation.  According to newspaper reports, a record breaking 10,000 people attended the first evening of the show.
On Tuesday, February 28th, the auditorium was open from 1 p.m. to 11 p.m. for it's first full day of exhibition.  Shortly before 2 p.m., a chauffeured Chrysler sedan transported Claire Windsor to the William W. Myer Drug Co. store at 15th and Welton St. for a personal appearance promoting a line a Max Factor beauty products.  An hour later, she appeared a few blocks away at the 17th and Broadway location.  Tickets for the Leap Year Party at the Denver Theater were also being sold.  At the party the following day, the bearer of the ticket was entitled to her choice of a free Max Factor gift. 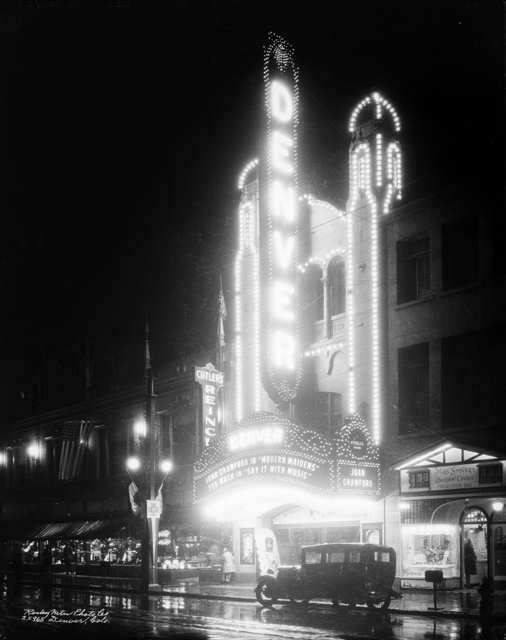 Above:  The 1926 Denver Theater which has since been demolished.  It stood across the street from the 1930 Paramount Theater which still survives. 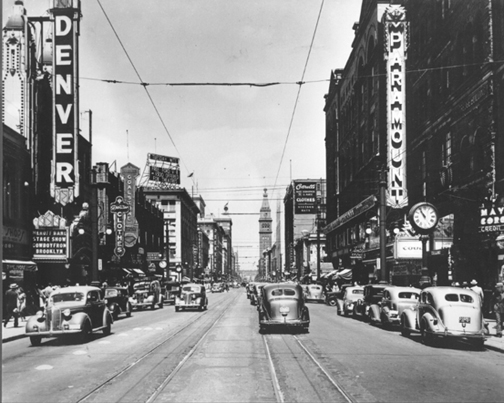 The third day of the Denver Auto Show was designated "Motor Club of Colorado Day" and publicity photos were taken of Claire meeting the current officers of the organization at their booth.  The day also featured a "Personality Exhibit," commonly known as a fashion show, for the ladies at 2 p.m. and again at 9 p.m. The Gano-Downs Department store of Denver provided the latest in both men's and women's fashions for the show as well as for the mannequins within the exhibition hall.  Being a day that comes only once each four years, a large "Leap Year Party" was held that evening at the Denver Theater, sponsored by the Rocky Mountain News.  60 couples were given special treatment as honored Birthday guests at the party.  480 eligible maidens with tickets "popped" the question to their beau and proudly escorted him to the party.  The evening's program included music by Lou Forbes' orchestra, tap dancing by Louise and Andrew Carr, and singing by the Vitaphone singers Hindse and Leonard.  The singer's rendition of "It Take a Good woman Now-a-Days to Keep a Good Man at Home" provided good advice for the occasion and "My Blue Baby," played by the orchestra, was specifically dedicated to the leap year babies.  At the close of the formal entertainment, guests were given a chance to meet Claire Windsor personally in the foyer of the theater.
The next day, March 1st, Claire was given a farewell party by the Denver Optimist Club.  The orchestra from the Denver Theater gave an hour long performance in her honor.  Then, the club bestowed on Claire an honorary lifetime membership in their club.  In return, Claire presented each member present with an autographed photograph of herself.  Although the Auto Show did not close for another two days, Claire's official duties came to an end.  At 6:30 that evening, Claire had been escorted back to the train station and was waving her final farewells.
Below:  Listen to the song "It Takes a good woman" by Milton Ager and Jack Yellen on YouTube: 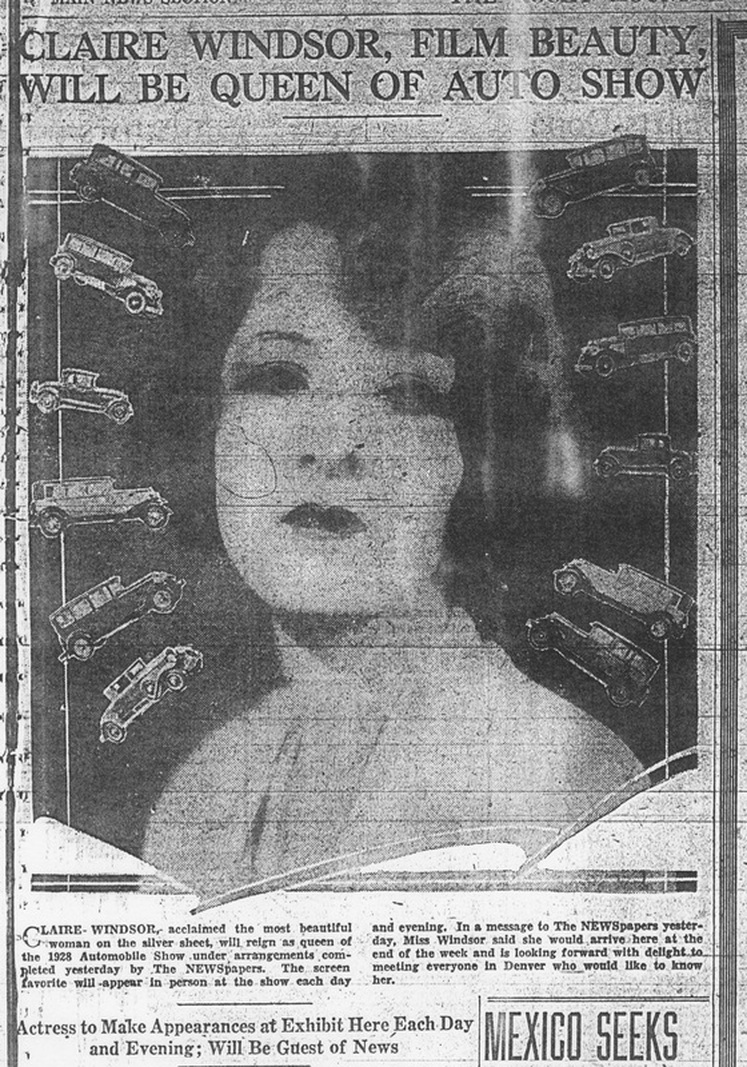 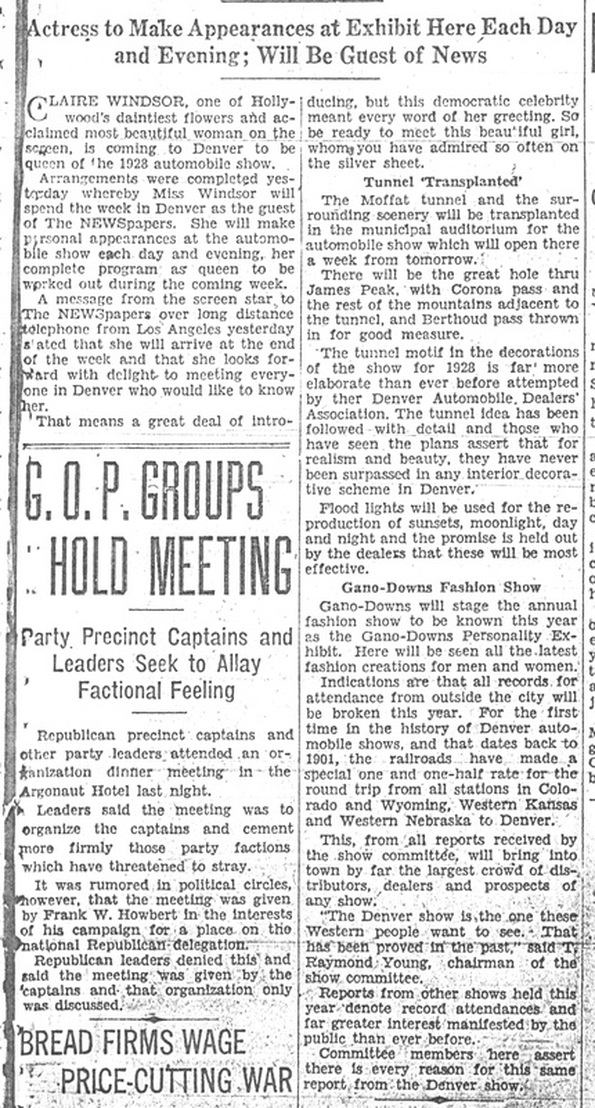 Note:  Claire Windsor and Tim McCoy's film "Foreign Devils" was being shown in Denver this week at the VICTORY theater. 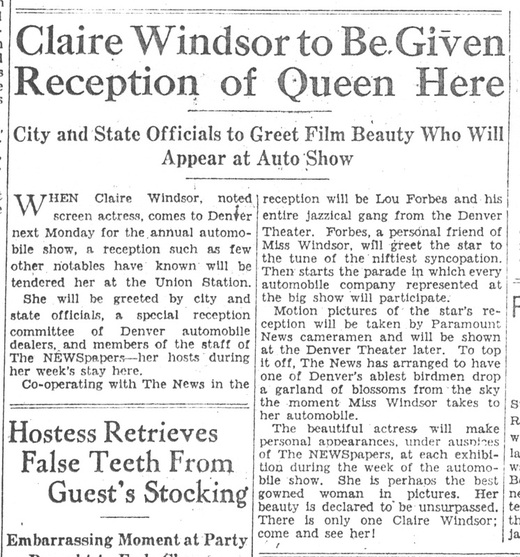 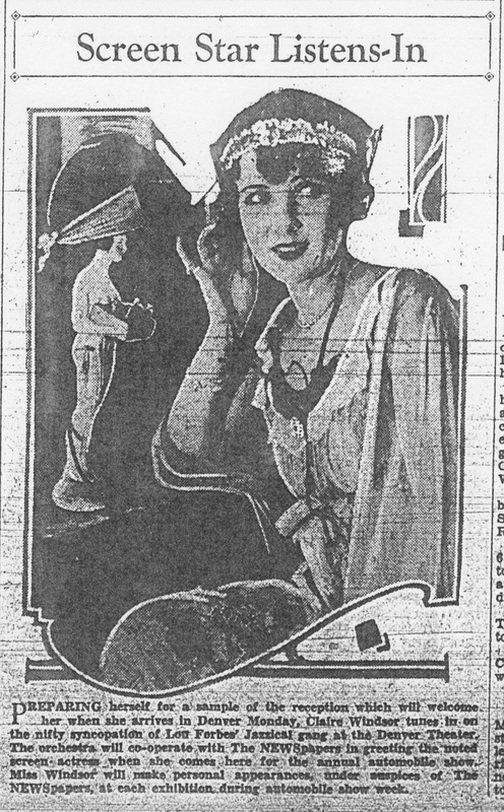 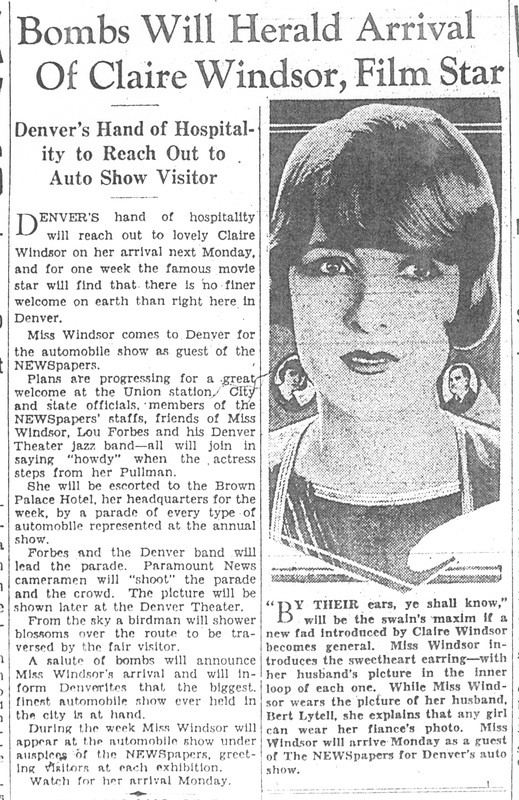 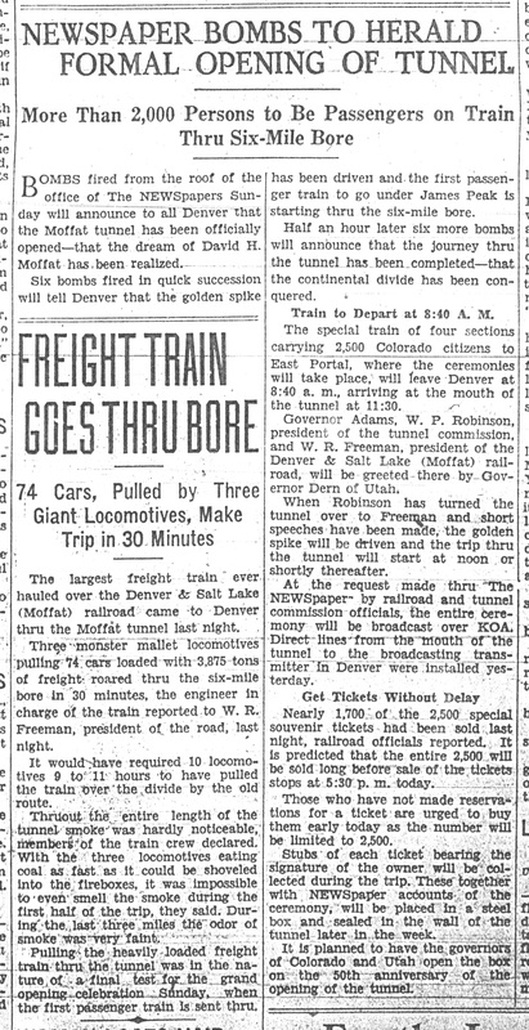 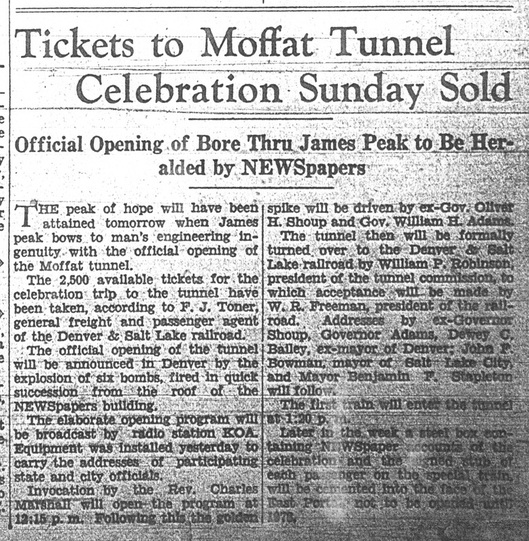 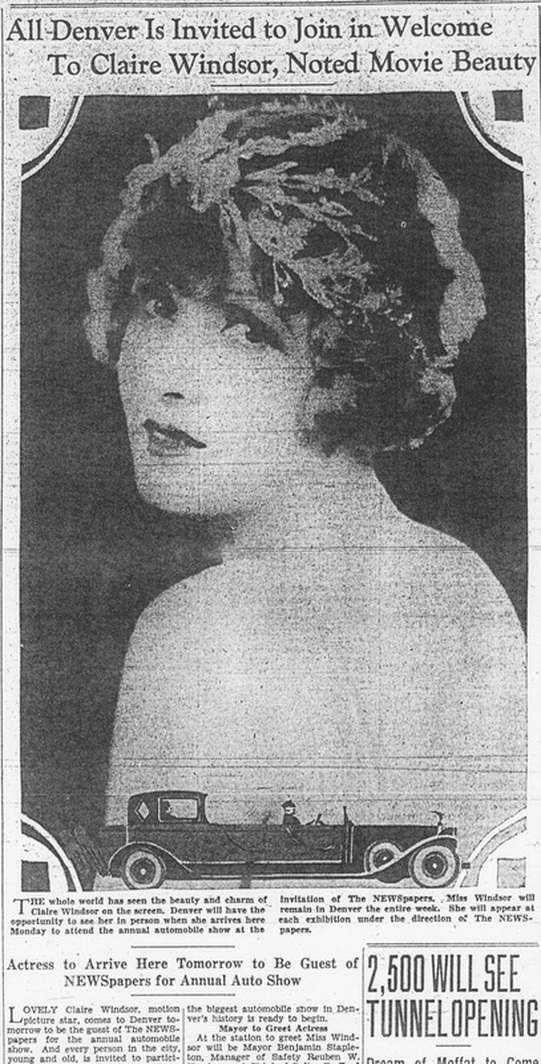 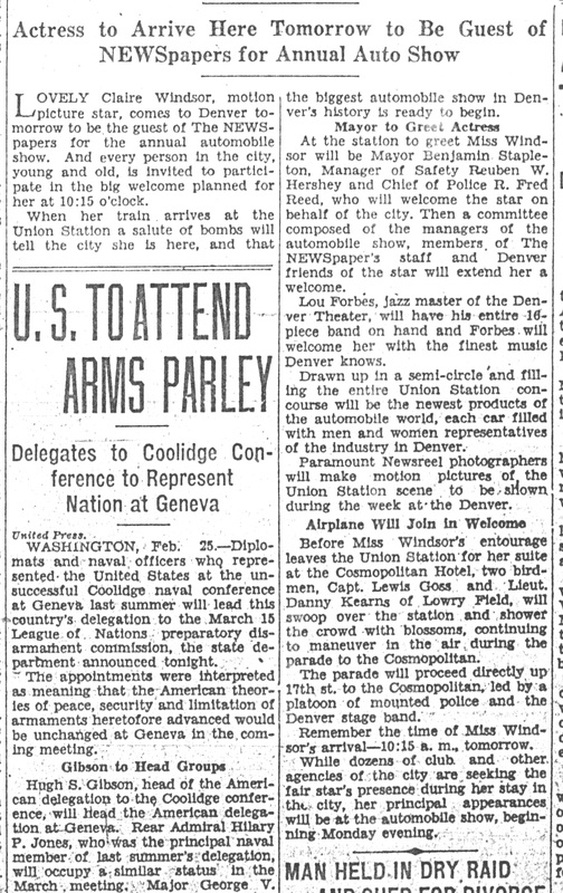 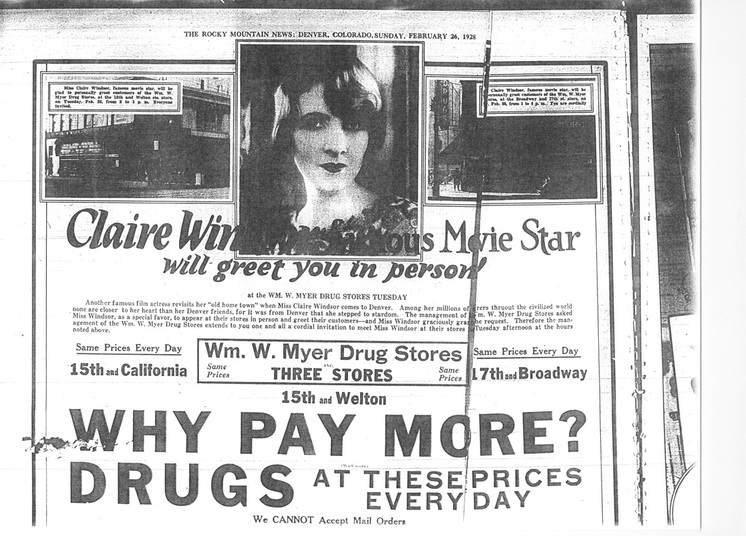 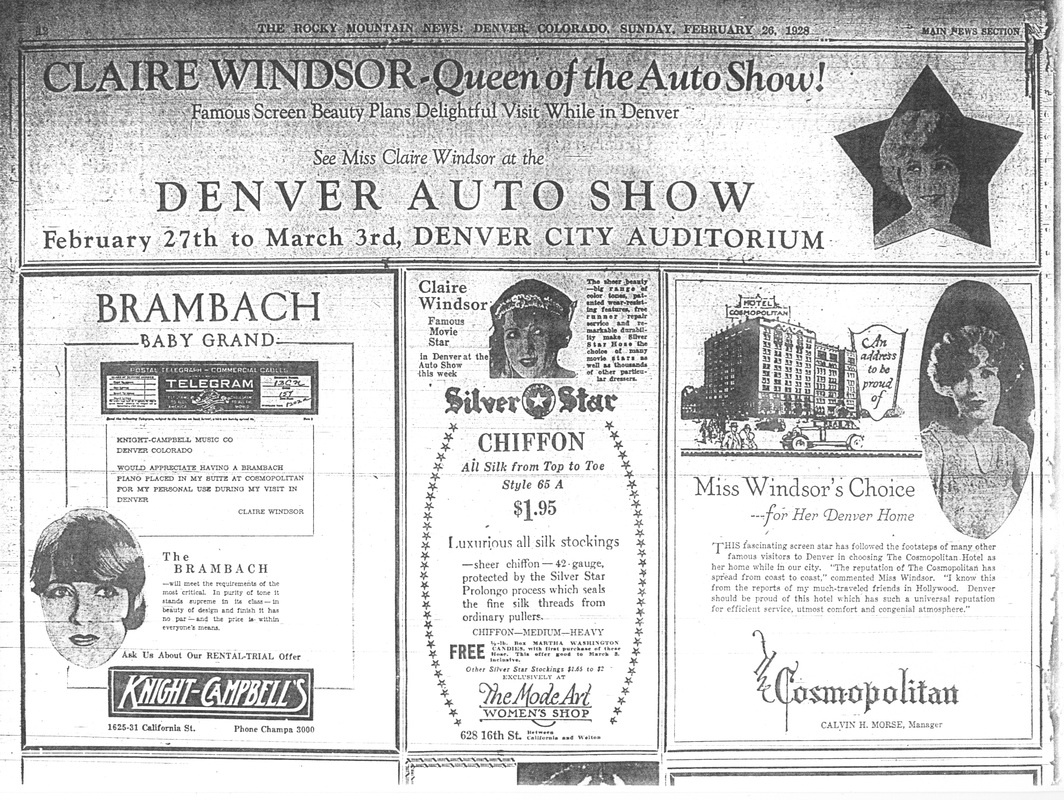 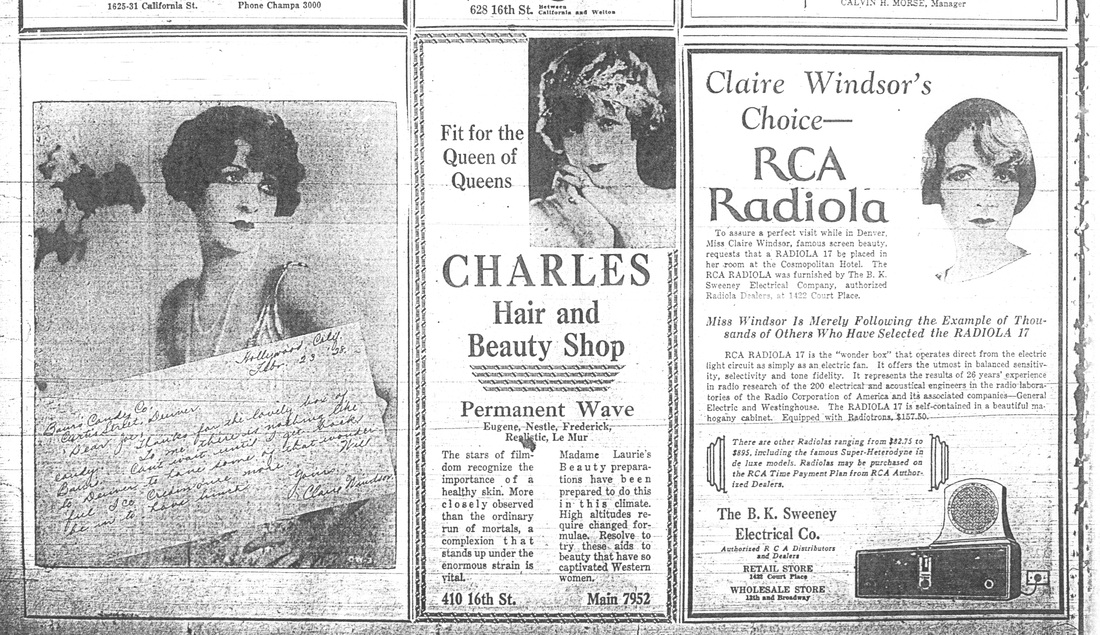 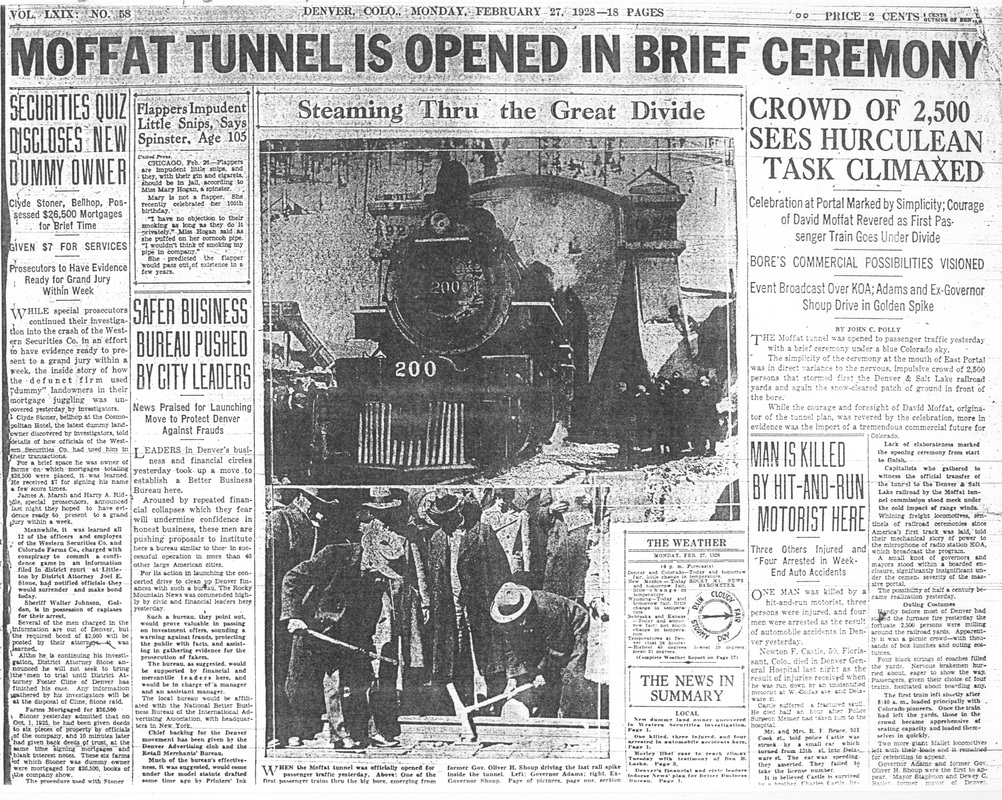 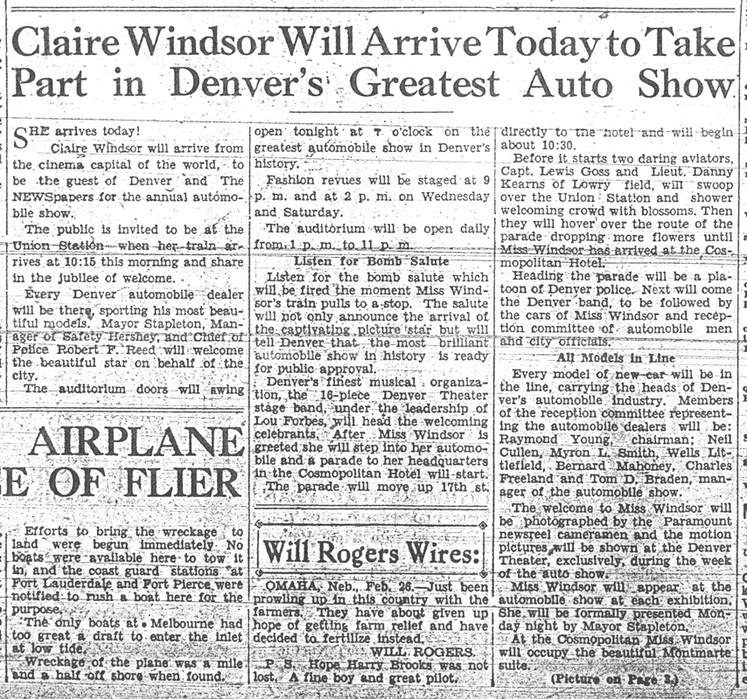 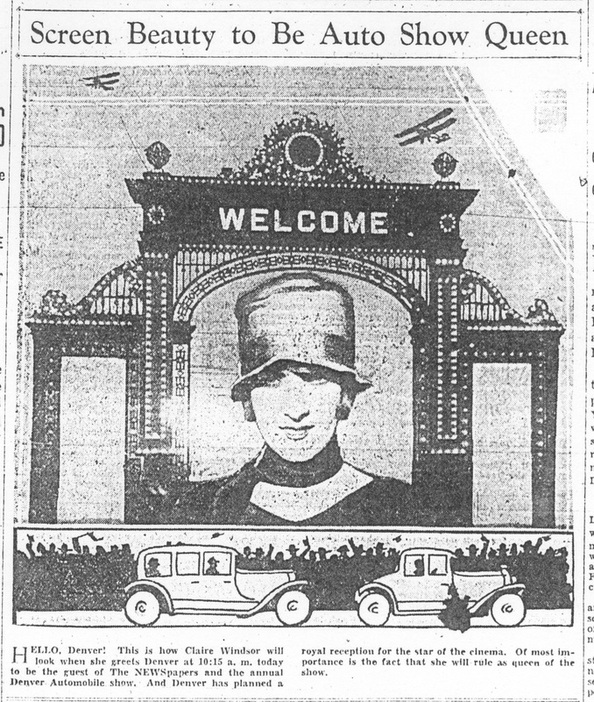 Note to Above:  The headline to the left reads, "Mussolini Speech Today May Have Vital Effect Upon Europe.  Duce to Talk on Criticism by Austrians..." and to the right the headline reads, "Lindy's Visit To New York Is Still Mystery.  Ace and Members of Flying Journey to Gotham Refuse to Talk.  Conference Is Held..."

Below:  The actual Welcome Gate in front of Union Station, with it's view down 17th Street, Denver.
Below:  February 28, 1928.  The Rocky Mountain News. 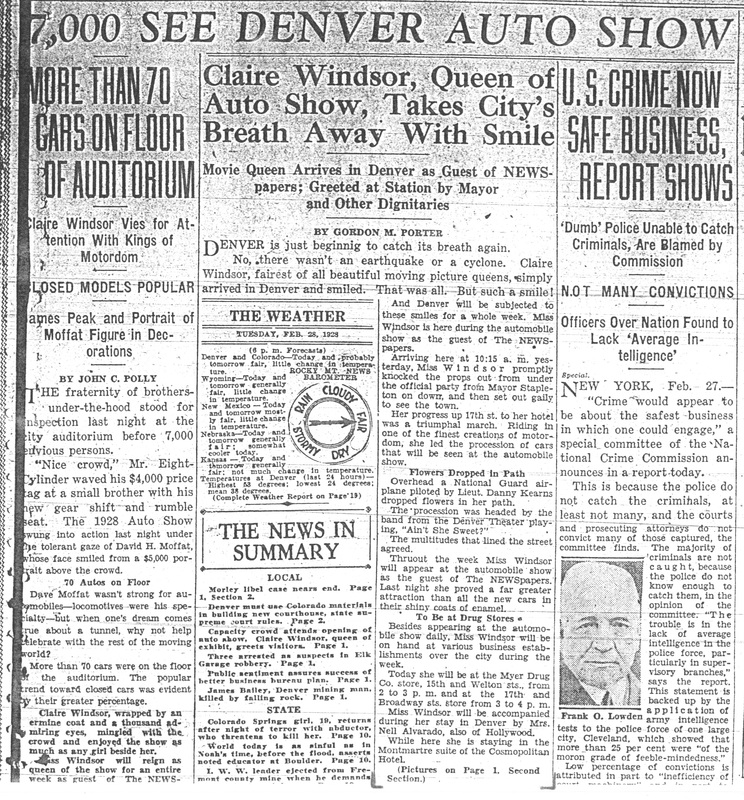 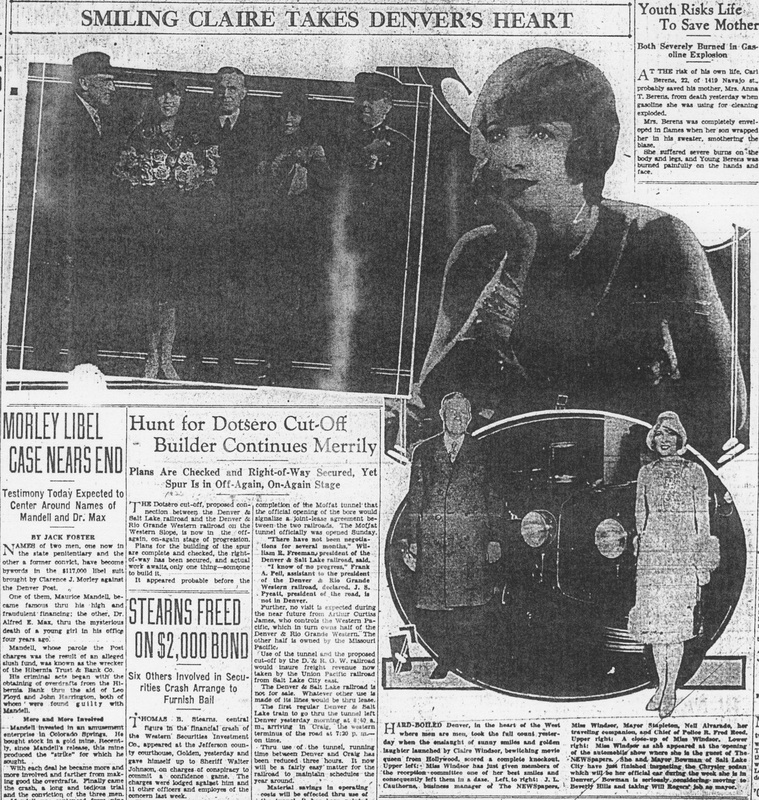 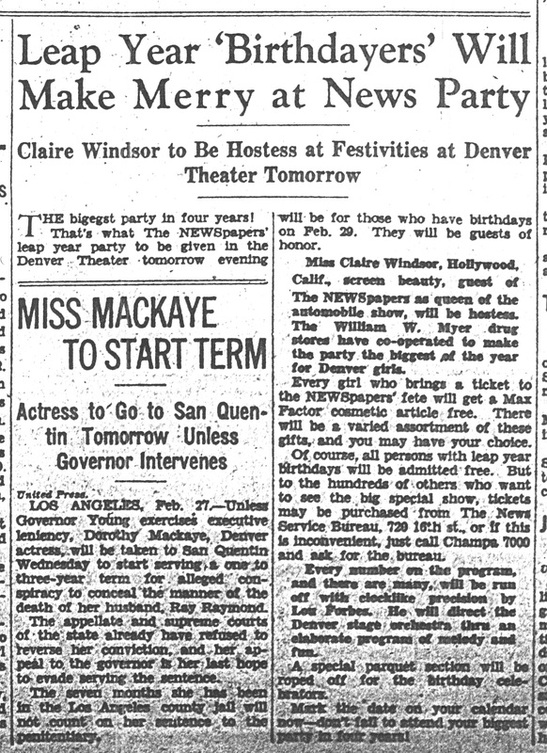 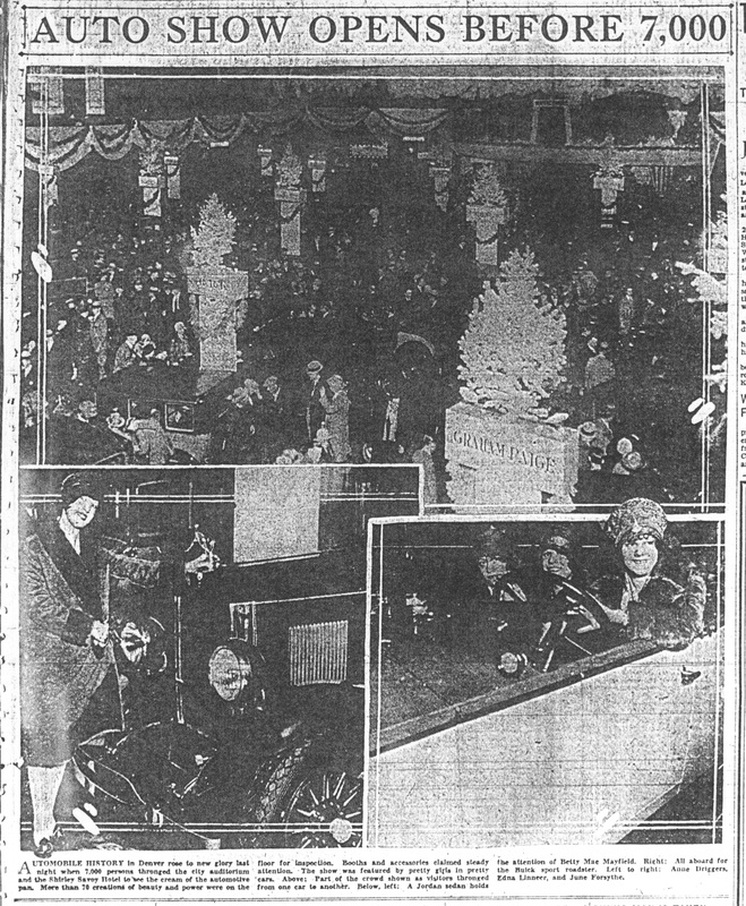 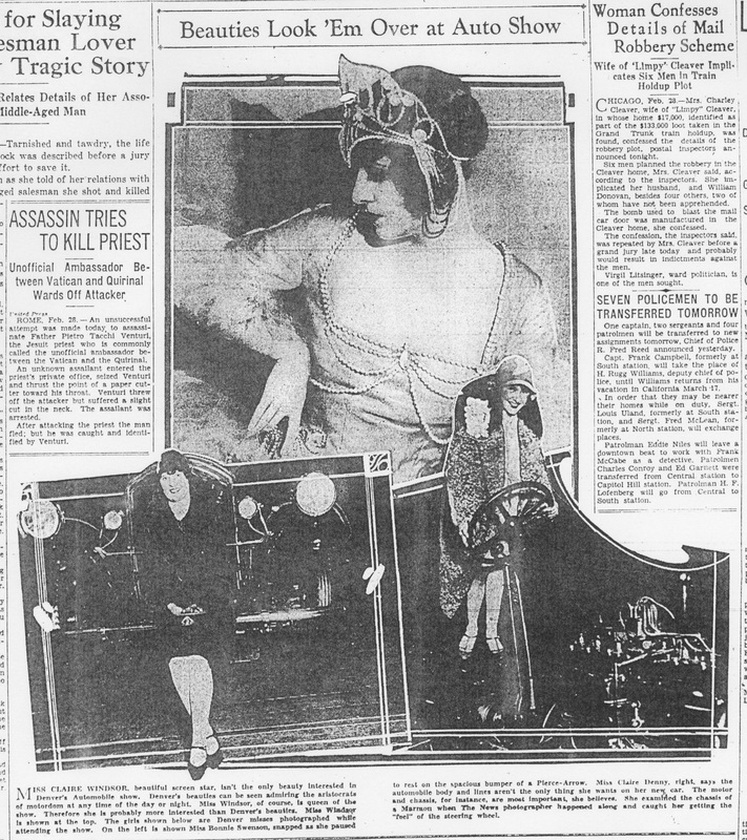 Note:  In the February 29, 1928 Rocky Mountain News is an ad for the Orpheum Theater in Denver.  Three times a day, a number of specialty Vaudeville acts provided live entertainment between the daily offering of photoplays.  Celebrated tenor, John Steel, is among the performers for this week.  Claire was somewhat romantically involved with John Steel before she left for Algeria for the filming of "A Son of the Sahara" with her future husband, Bert Lytell. 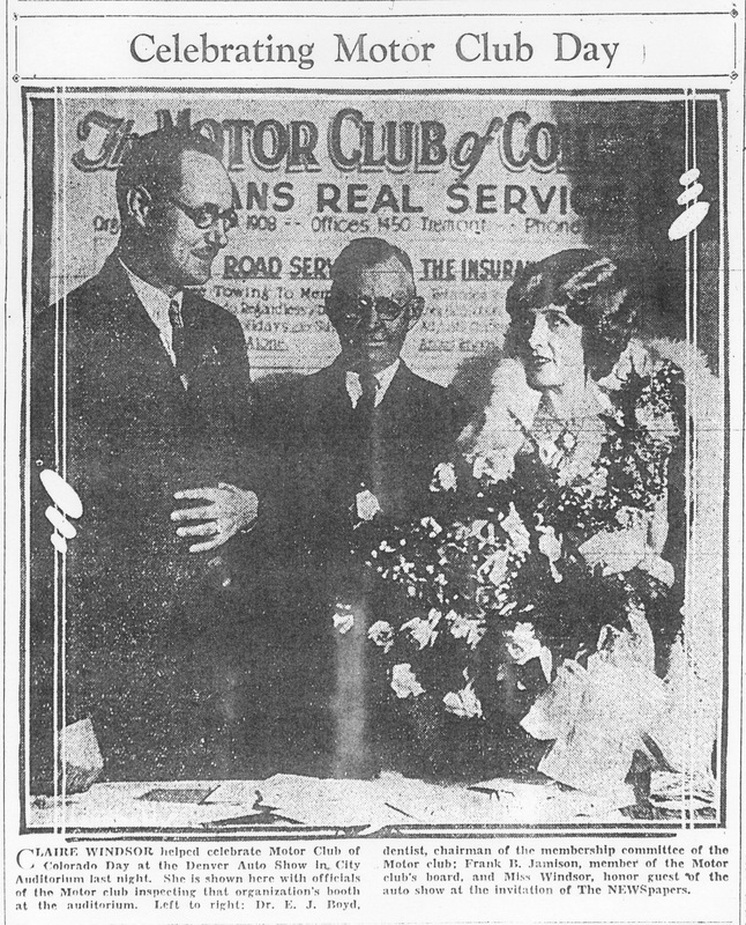 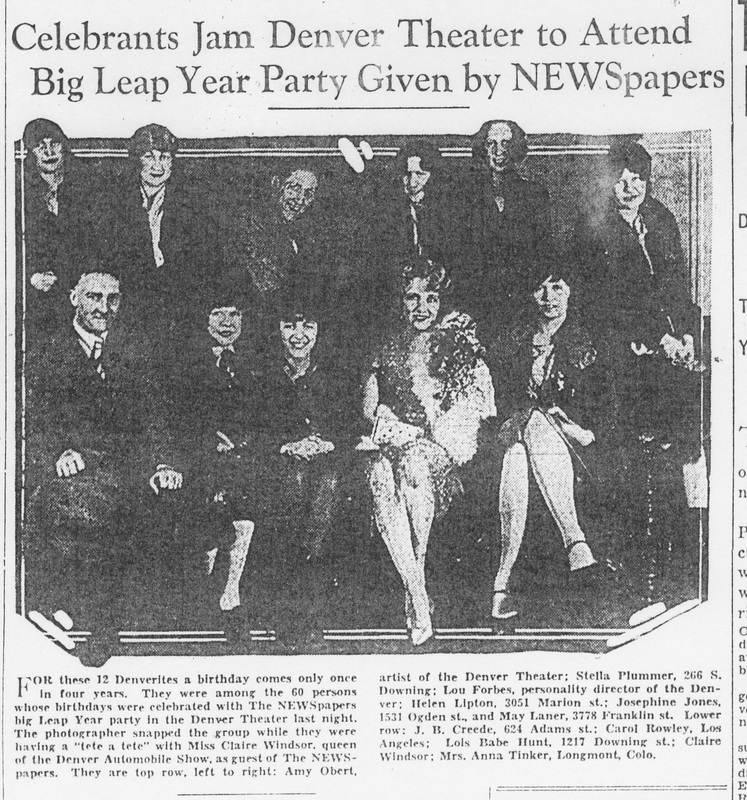 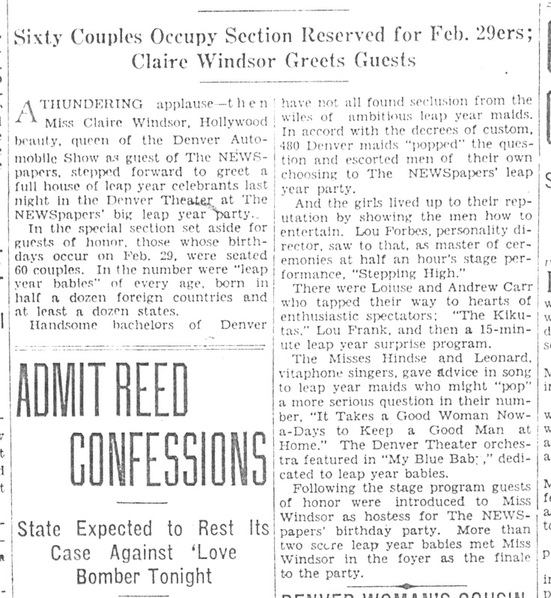 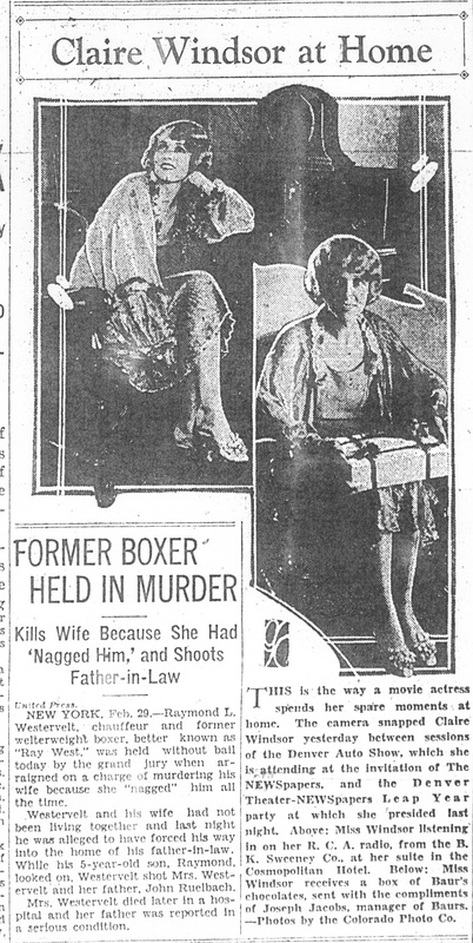 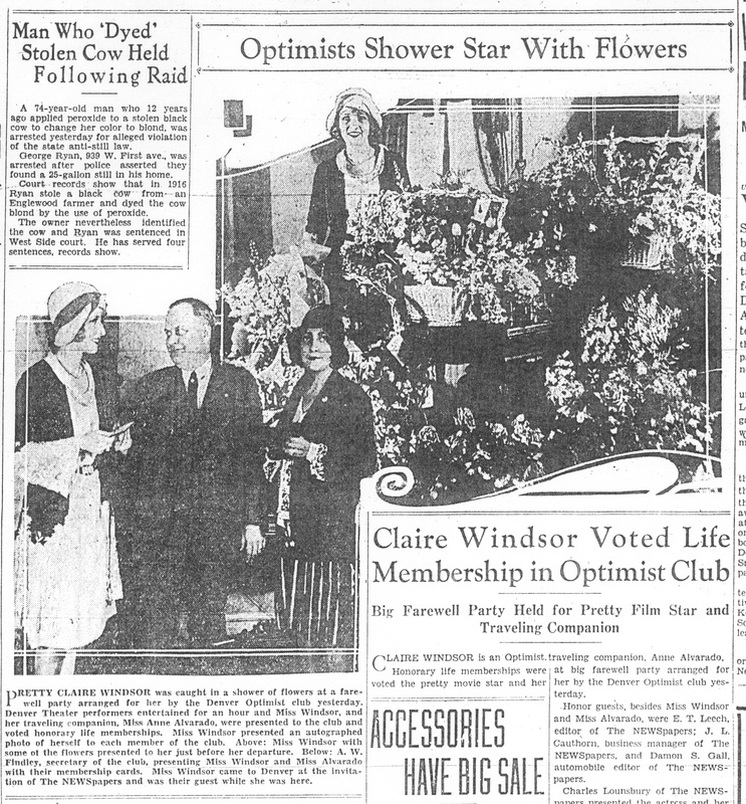 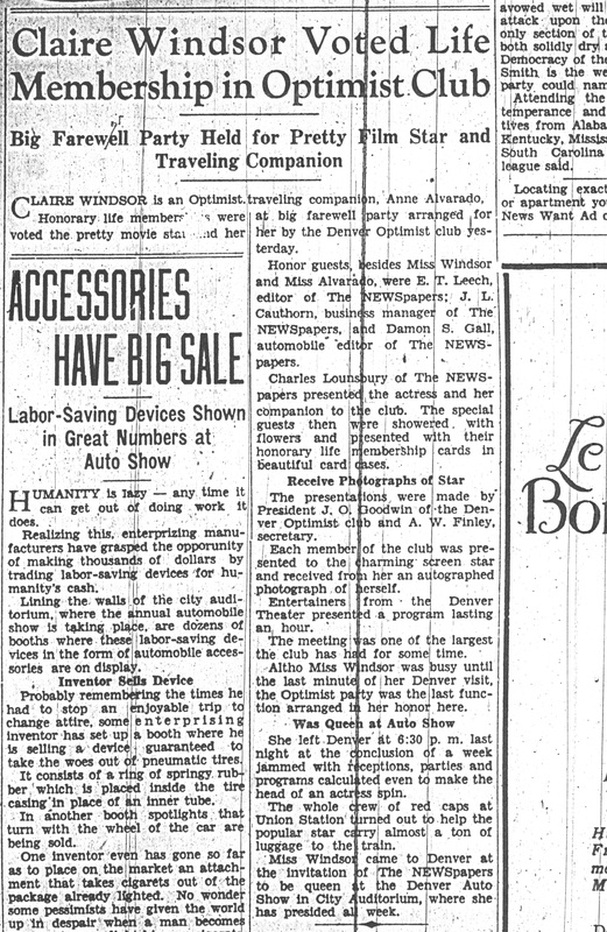 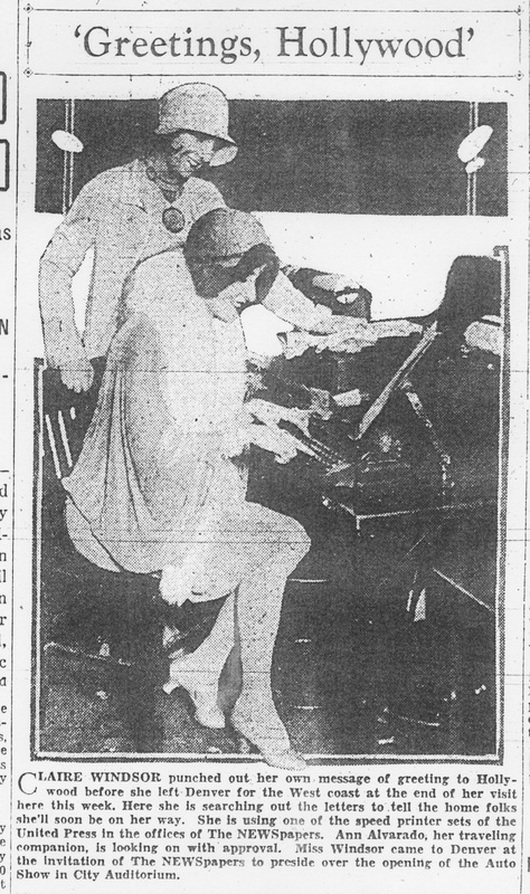