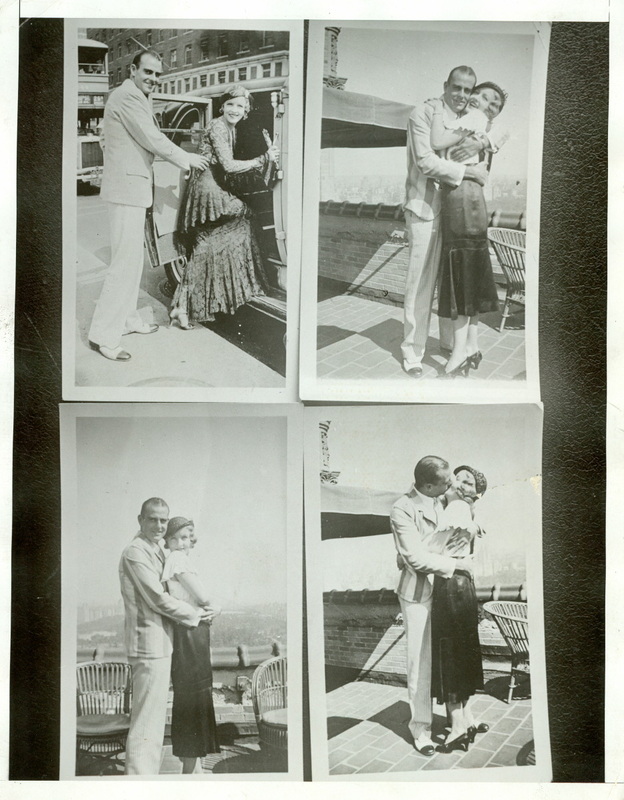 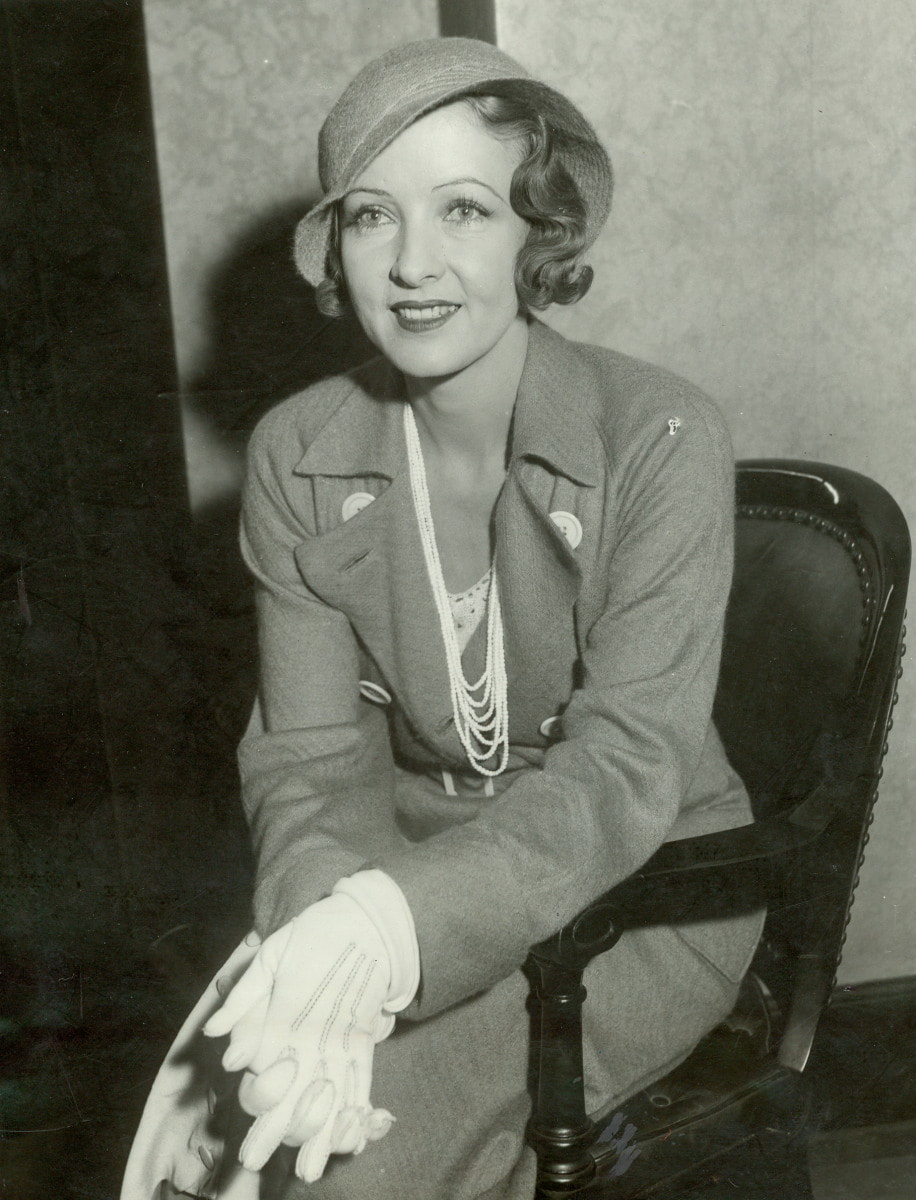 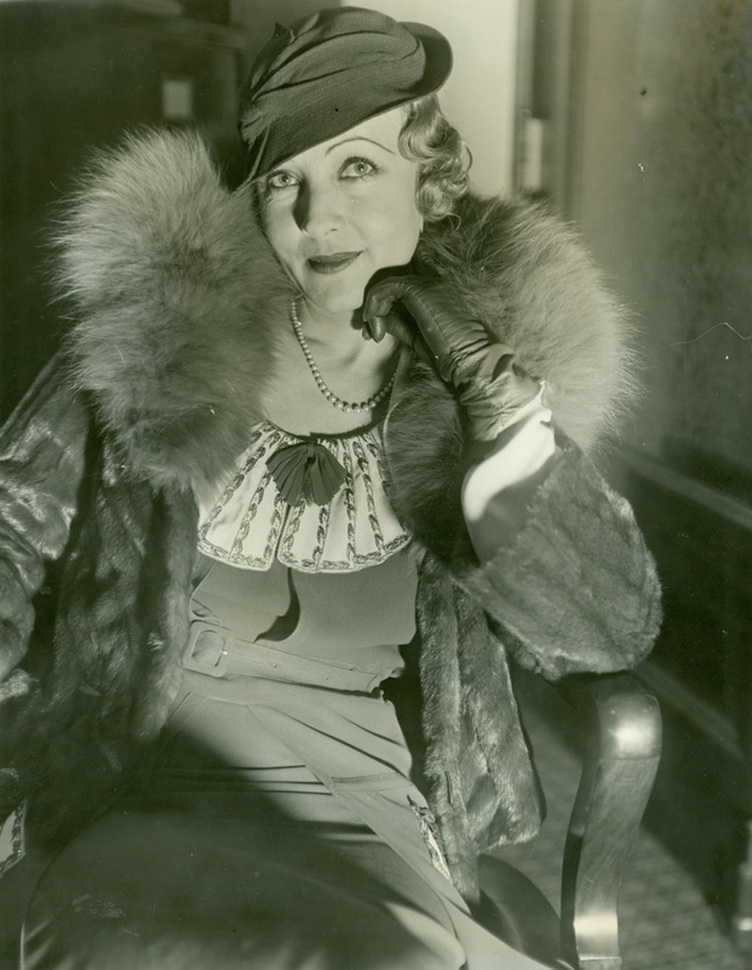 Above:  January 26, 1933:
LA 21266F  Claire Windsor, former screen star, is seen here in Los Angeles court as she was questioned about her financial dealings with Alfred C. Read Jr., of Oakland, Cal.  Miss Windsor, who was sued for stealing the love of Read by his wife, showed cancelled checks, assertedly.  The records of her financial dealings with Read, follow complaints made to the District Attorney concerning the sale of security by Read. 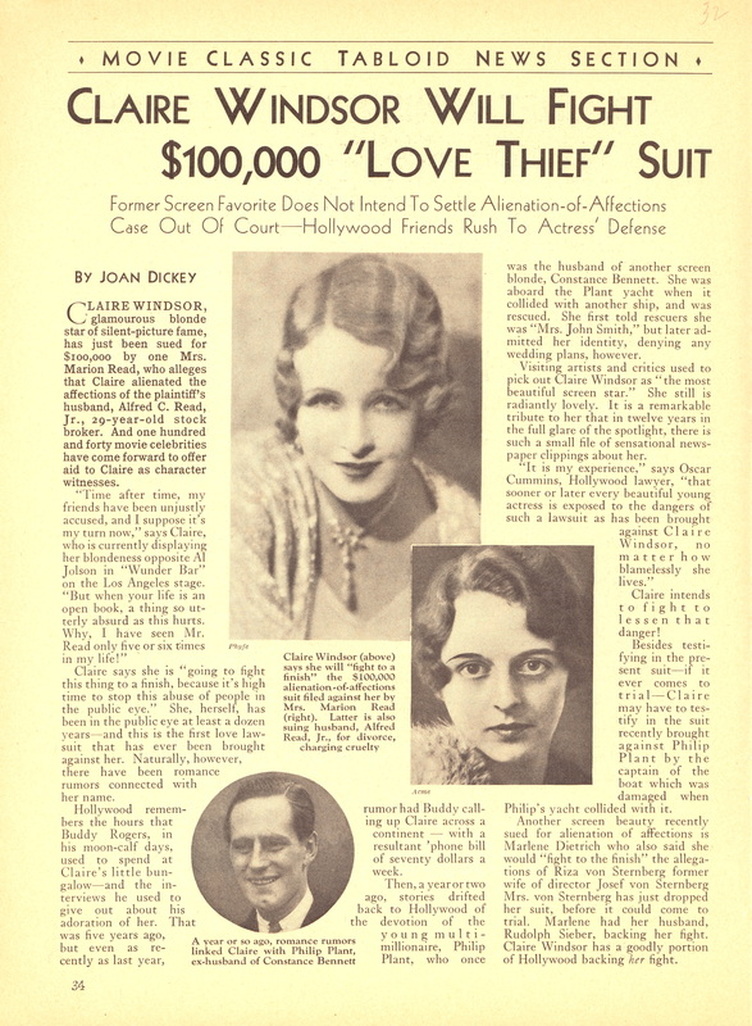 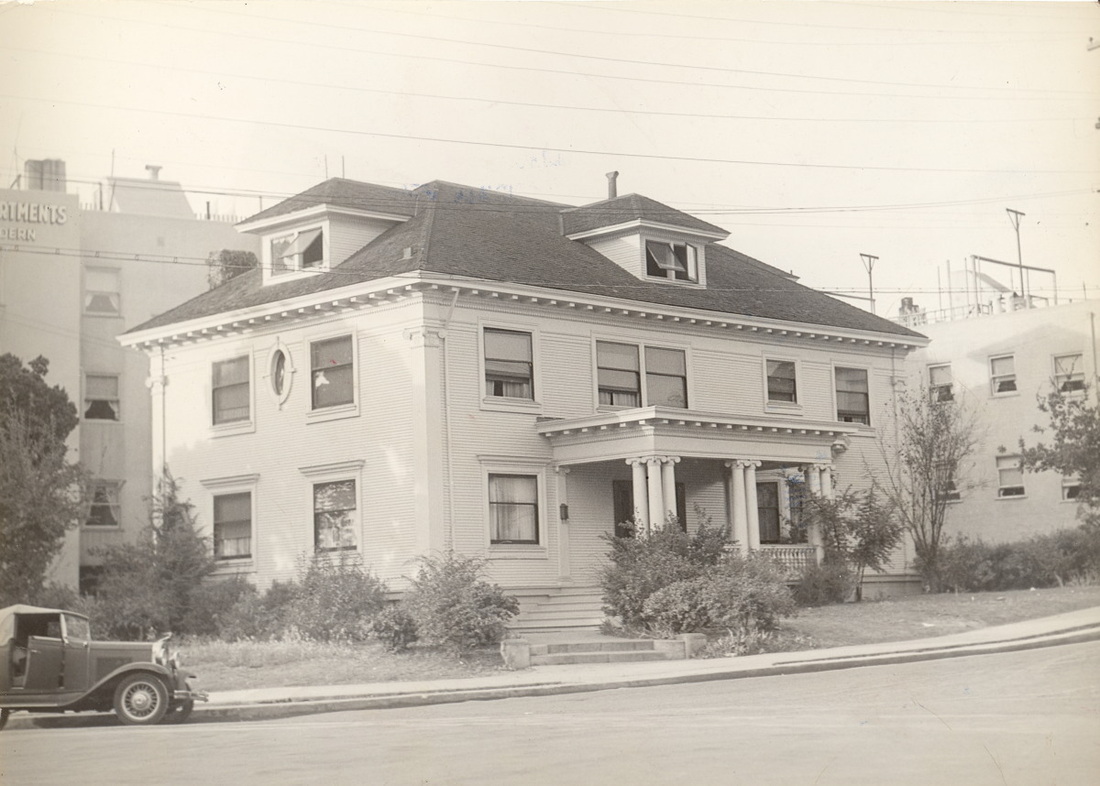 October 28, 1933:
This is the house at 187 Athol Avenue, Oakland, where Mrs. Marian Read, divorced wife of Al Read, California Lothario, is staying with her father, Mr. Johnson.  The Read’s two children, Buddy and Sis have become neighborhood pets.  The house is situated a block from the shore of Lake Merritt in a district of fashionable homes and apartments.
Below:  “Buddie” and “Sis” Read talk over the mysterious absence of their father, James Read, while playing on the lawn of their maternal grandfather’s home in Oakland. 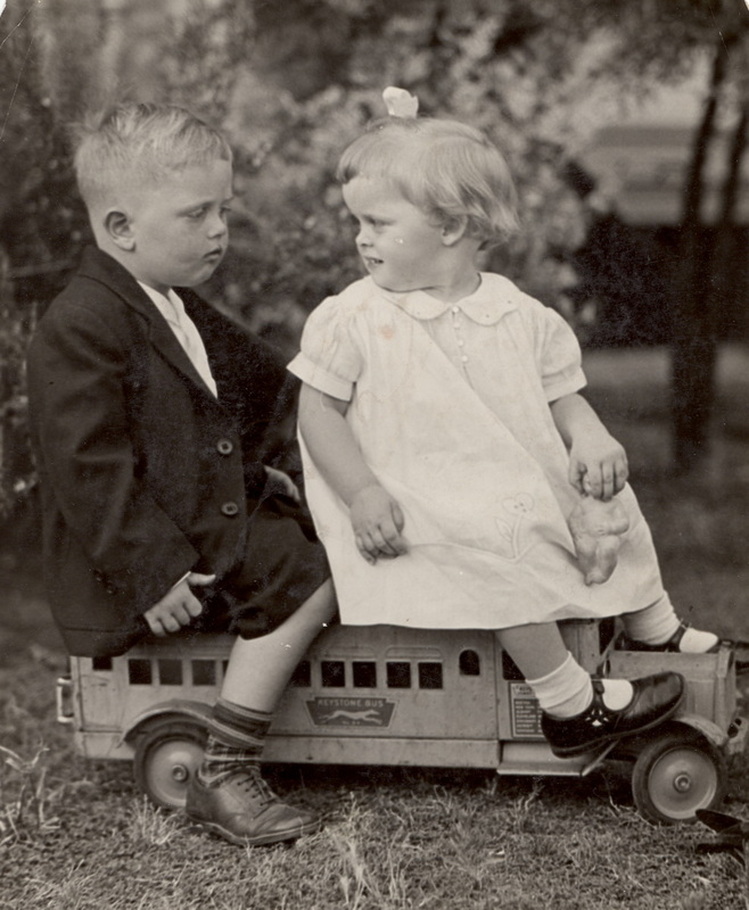 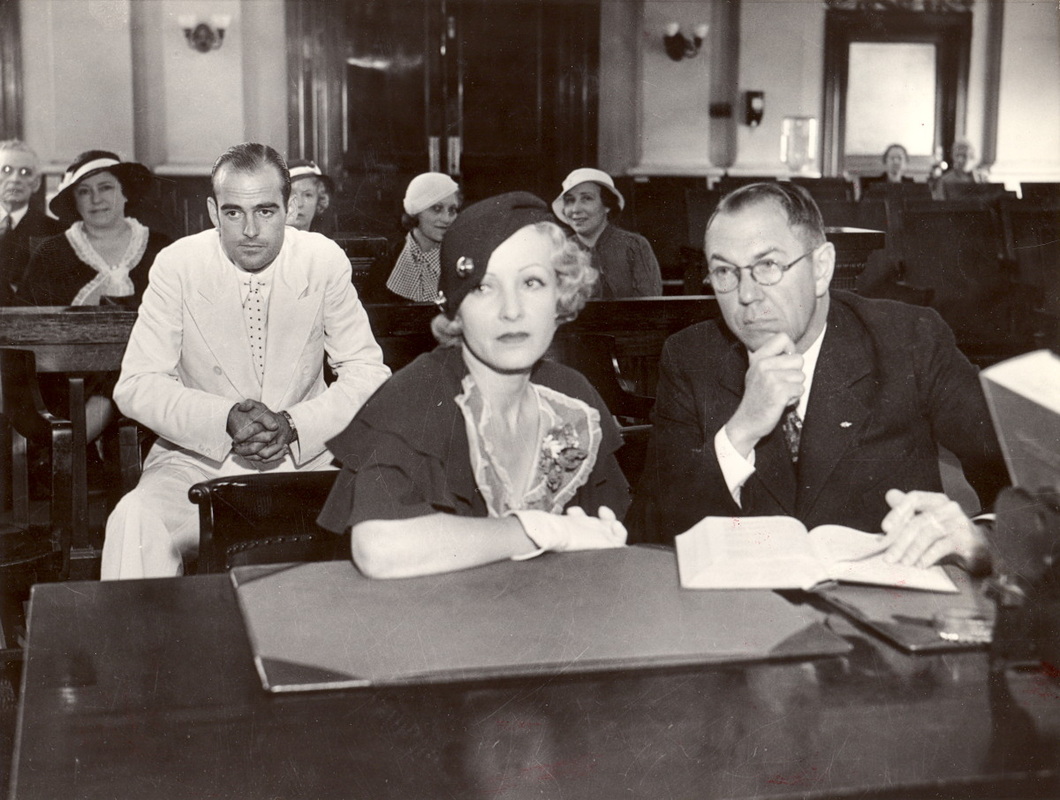 Above:  Alfred C. Read Jr. in white suit, Claire Windsor and attorney Leonard Wilson at the table.  Behind Read to the left, is George Cronk, Claire's father, and Nellie Huck, her older sister. 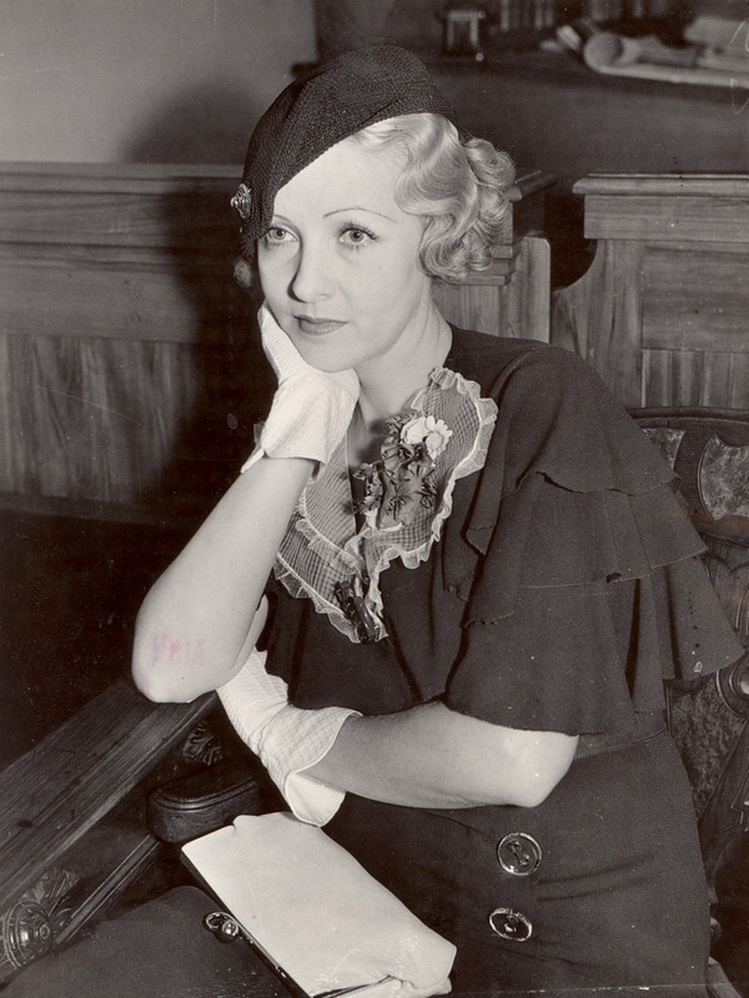 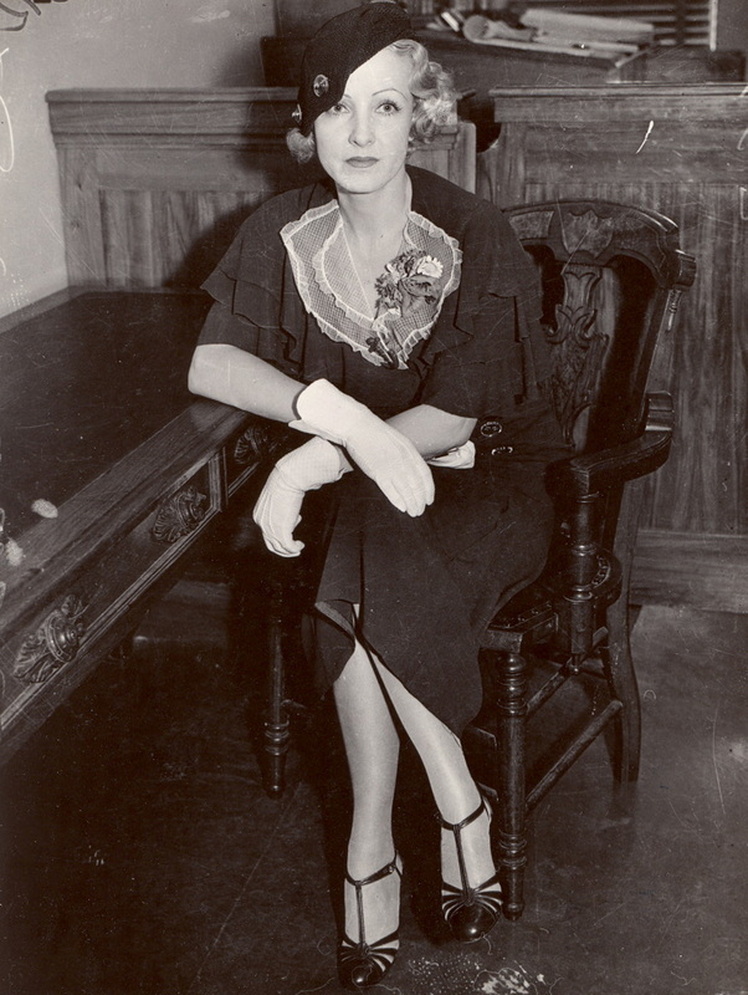 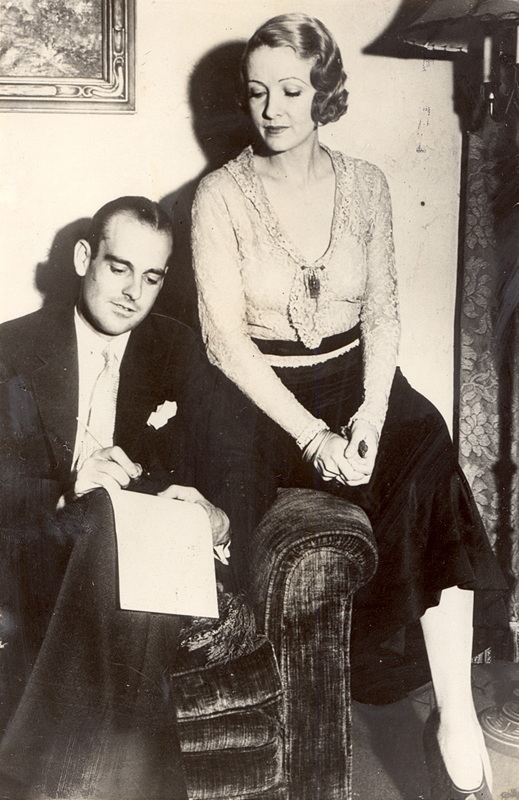 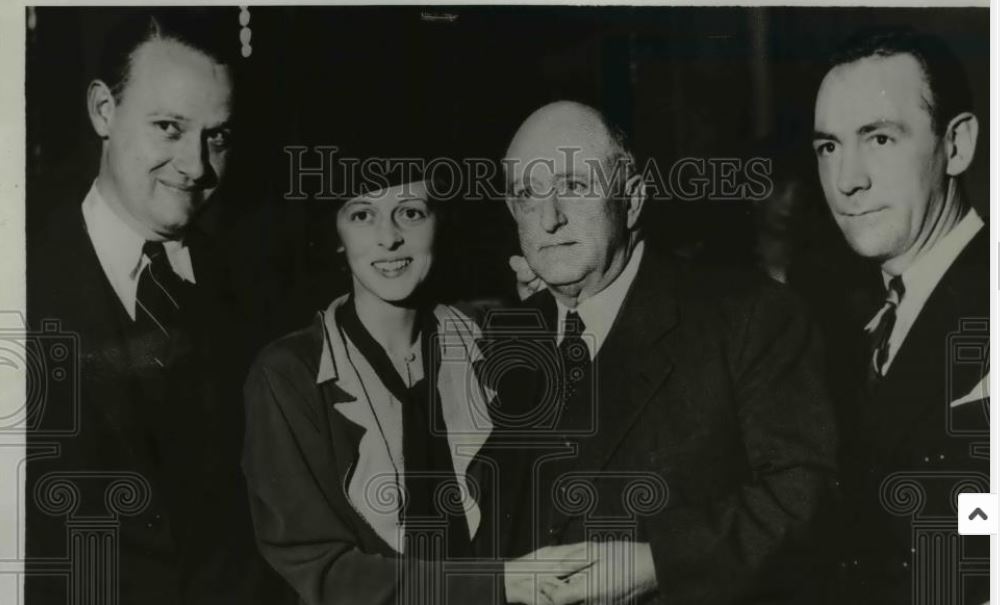 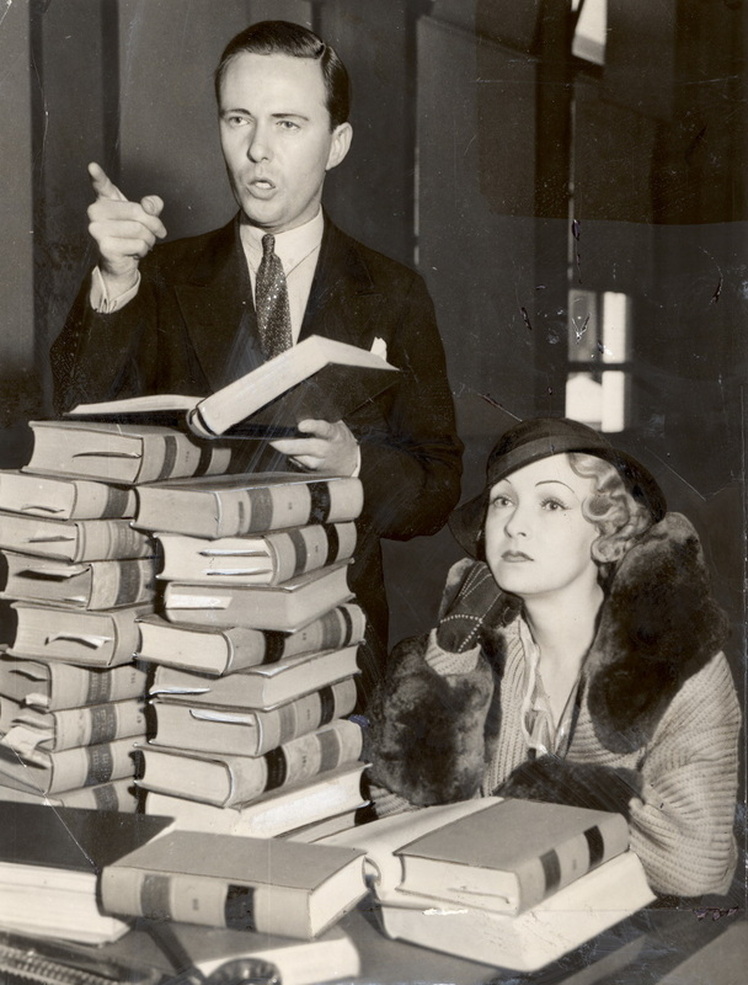 October 30, 1933:
Los Angeles, Calif.  Photo shows Miss Claire Windsor and attorney William Rains who appeared in court in Los Angeles, Calif., during arguments for a new trial in the heartbalm suit in which Mrs. Read was awarded $75,000.

This staggering stack of legal books was used by Claire Windsor’s attorney, Wm. Rains, for reference in defending his client when Mrs. Read sued her.  It‘s doubtful if such an array of volumes ever figured in even a spectacular murder or kidnapping case.  Above:  Rains and Claire in court. 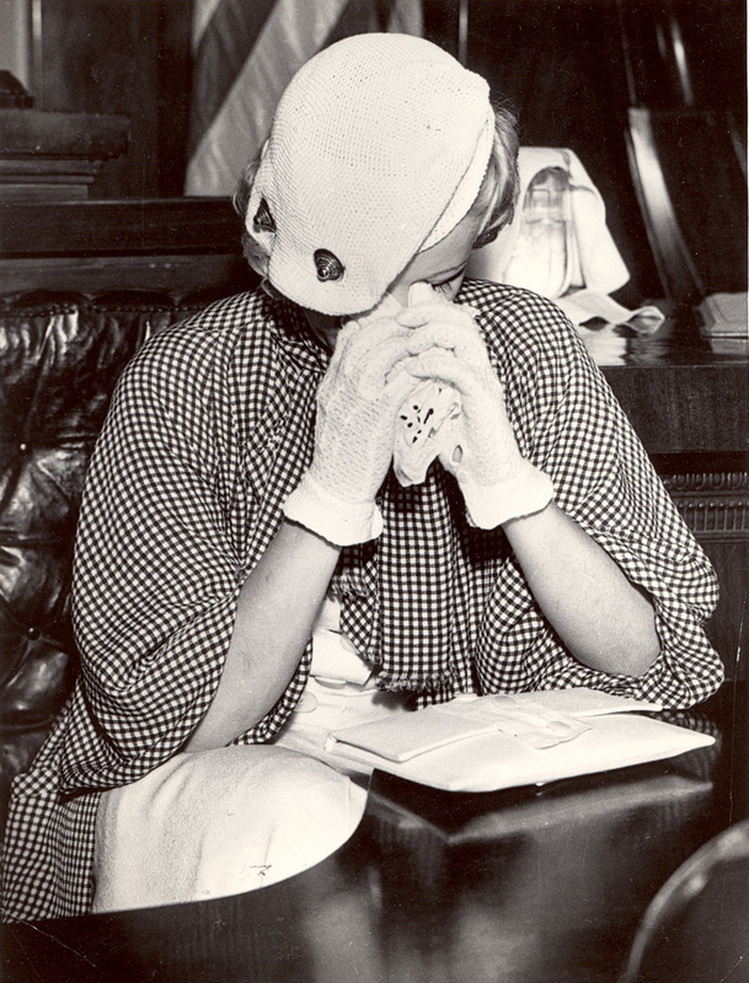 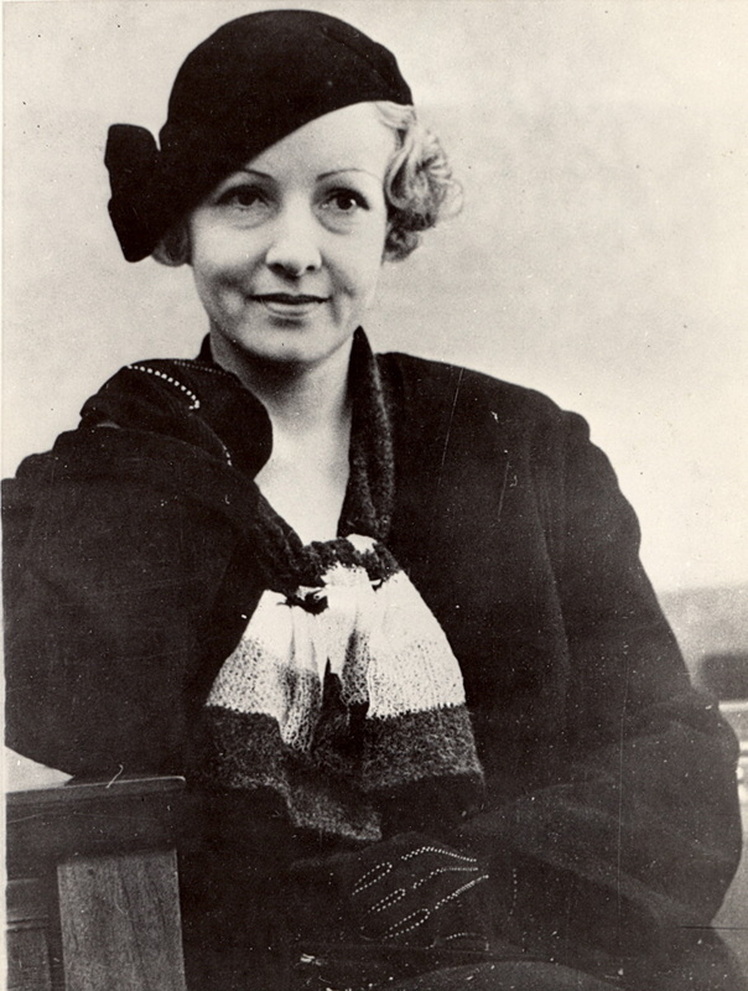 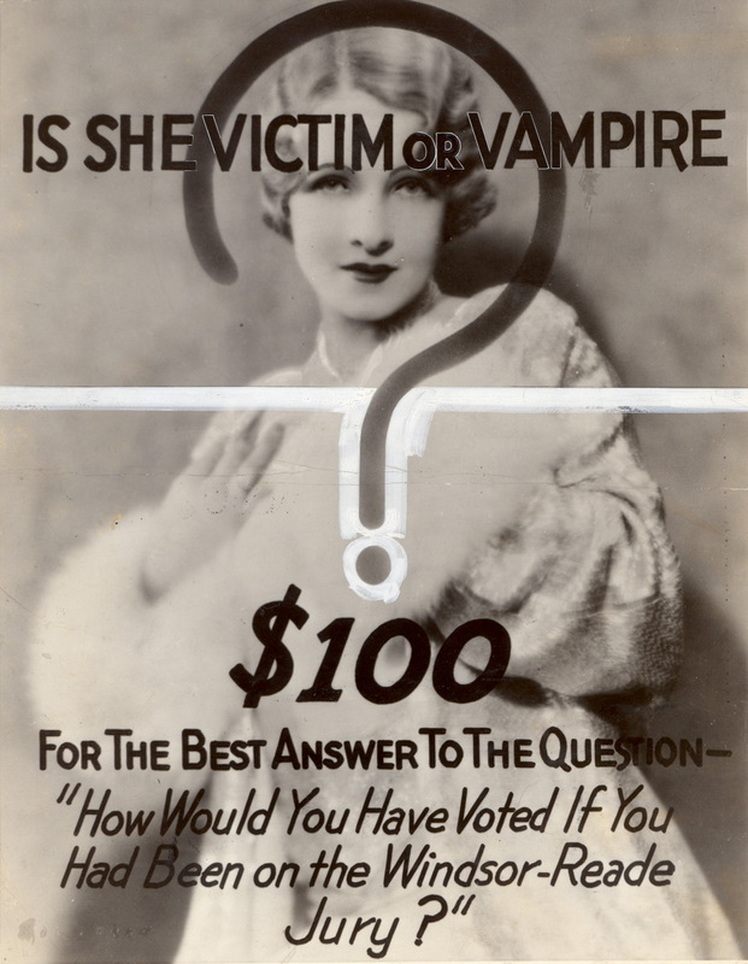 December 17, 1933:
HOW WOULD YOU HAVE VOTED IF YOU HAD BEEN ON THE WINDSOR-READE JURY?

Because I believe Miss Windsor was the innocent victim of a colossal frame-up, I would, had I been on the Windsor-Reade jury, have voted an unqualified acquittal--refused absolutely to sanction the alienation damages sought by her tormentor, Mrs. Alfred C. Reade, either in part or in whole, and questioned the sanity of the remainder of the body who did not reach a like verdict.

Here was a young woman who met a young man and fell in love with him, completely ignorant of his attached state, he neglecting to enlighten her but reciprocating her affection in full.

Then come the "wronged" wife, who is on the verge of a divorce with her mate, and demands $100,000 damages for the alienation of his affections, confident the courts will intercede in her behalf despite her own illegal relationship with her husband after they are divorced.

The jury falls for the "broken home" hokum, views with jaundiced eye the declaration of the victim that she meant no harm, and grandiosely hands out a princely sum to the avaricious plaintiff on the ground that she is “more sinned against than sinning”--that the defendant has irrevocably disrupted her marital relationship--and that it is going to make an example of this vampirish actress to show her and her kind where they get off.

This despite the man’s mother’s own testimonial that her son and his wife were at sword’s points with each other even before he met the actress, and that they were contemplating separation by divorce.

Any fair-minded, unprejudiced juryman could have reached no other verdict than to throw the whole thing out of court.

I think, too, that using the courts for the adjustment of such cases is wasting the taxpayer’s money, and should be stopped.  When this is done, wives like Mrs. Reade will have no medium through which to gratify their selfish desires, and husbands will learn not to deceive eligible women as to their married state.

If there had been no court to intercede in this case, Miss Windsor would have, as soon as she discovered Read’s married state, dropped him like a hot coal, the wife would have had no surcease for her fancied wrongs, and the whole thing would have been quickly forgotten. 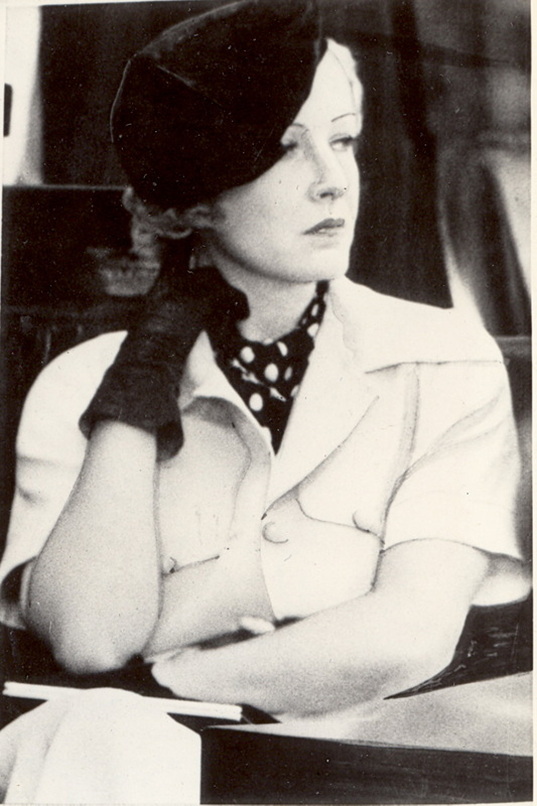 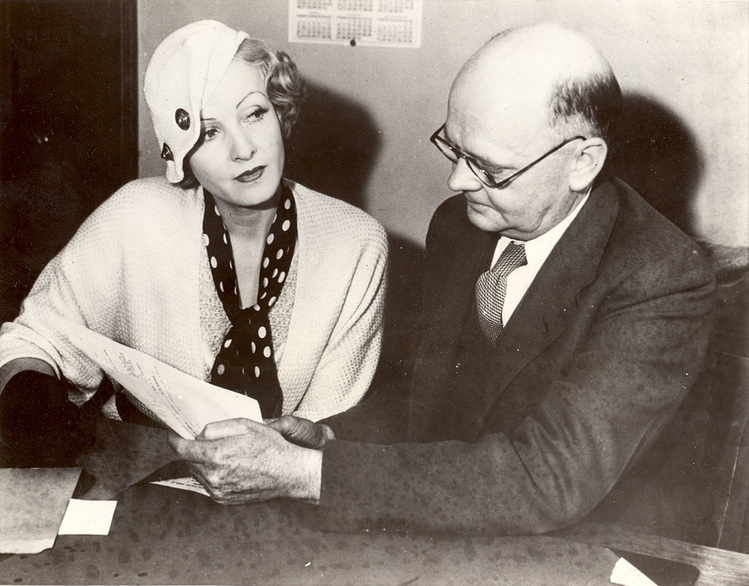 Above, October 19, 1933:  BROKER WHO TURNED BOXER SOUGHT ON PETTY THEFT CHARGE
Los Angeles.  Miss Claire Windsor, screen star is shown at the office of the Deputy Attorney for the City of Los Angeles where she made a complaint of petty theft against Alfred C. Read Jr., former Oakland stock broker who recently broke into print when he became a professional boxer.  Miss Windsor was the defendant in a $75, 000 Alienation suit brought by Read’s former wife.  Miss Winsor claims Read removed money from a purse in her home. 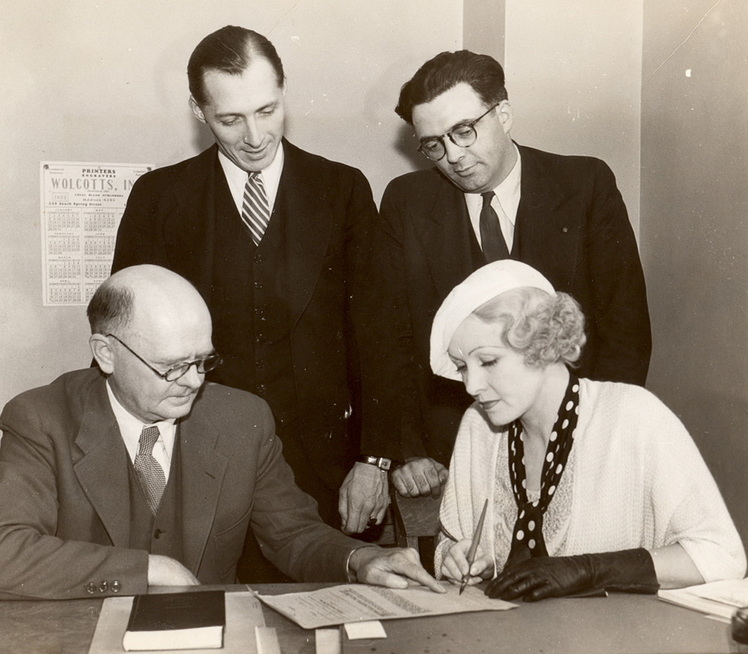 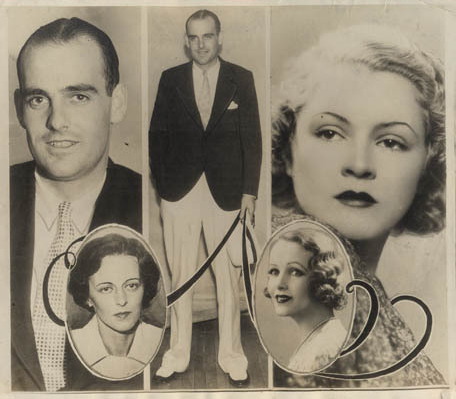 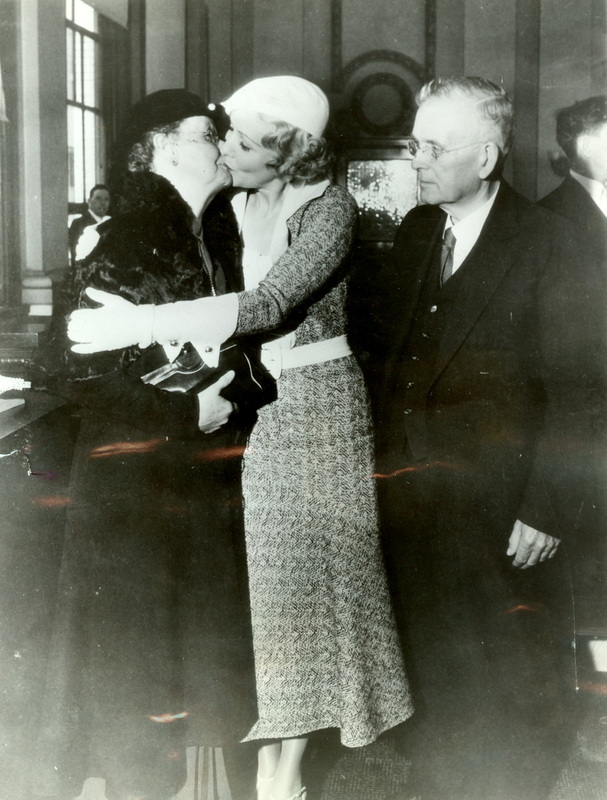 Above, September 15, 1933:  Actress must pay $75.000 for broker’s love. Claire Windsor, blond actress of the stage and screen, is shown receiving the affectionate sympathy of her parents, Mr. and Mrs. G. E. Cronk, after a divided jury in Los Angeles decided she had alienated the affections of Alfred C. Read, Jr., former broker, and awarded his former wife, Mrs. Marian Y. Read, $75.000.  Mrs. Read, Oakland, Calif, socialite had sued for $100,0000.  Miss Windsor termed the verdict “outrageous.”