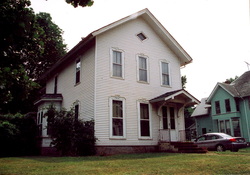 We shall begin Claire Windsor's story with the marriage of her parents,  George Edwin Cronk and Miss Ella Rose* Fearing, on October 21, 1885 in Davenport, Iowa.  The ceremony was held at the residence of the bride's parents at the corner of 11 St. and Arlington Ave.  After a short visit with friends and relatives, the newlyweds boarded a train and headed west on the central branch of the Union Pacific R. R. to their new home in Kansas.

[*Note:  At different points in her life, Mrs. Cronk was known as Ella, Rose,
and Rosella.] 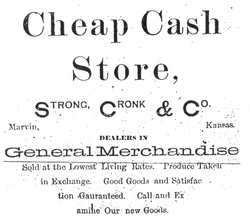 A month previous, George Cronk and Charles E. Strong, a former classmate and now business partner from Cedar Rapids, had scouted out a location for their business venture in the booming prairie farmlands of Kansas.  Their search led to Marvin, in Phillips County, which lay south of the county seat and directly on the railroad line which promised to be the most direct connection between Atchison and Denver.  Frank Fearing (Jr.), Rosella's younger brother and third member of the business venture, remained in Cedar Rapids where he worked for the Chicago and North Western Railroad.  The young entrepreneurs bought the inventory of Judge Wright's general merchandise store in Marvin and proudly renamed the store Strong, Cronk & Co. 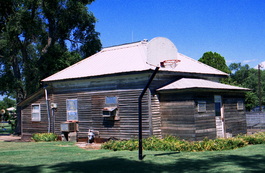 The first year in Marvin proved very profitable and the future looked equally promising.  Charles Strong had fallen in love with Emma Gibbs, a local girl whose family homesteaded in Phillips County in 1872, and the two were married on October 28, 1886.  Soon after, Strong, Cronk & Co. purchased "Marvin Hall," the building they had been renting for their store.  Both George and Charles bought town lots and began building homes which they completed in April of 1887.  Rosella was five months pregnant when she and George moved into their modest, 20' by 22', single story, four room house.  Once settled into their new home, a barn was added to complete the property.
The town of Marvin was growing too.  N. W. Gibbs, Emma Strong's father, was building a hardware store and Mr. Church was speculating on renters for his new structure.  The town was in desperate need of a Post Office, so when Charles Ford arrived in town looking for a space for his printing press, Strong, Cronk & Co. seized  the opportunity to add an 18' by 40' building adjacent to Marvin Hall in which to house them both.

The Marvin Monitor newspaper opened up in it's new location, but suspended operations after three issues.  The reason stated was the lack of advertising support, however local politics seems to have been a major contributing factor.  In any case, Marvin had lost its newspaper.  Strong, Cronk & Co. stepped to the fore and rallied the citizens behind the purchase of the 9 month old newspaper.  The ambitious entrepreneurs successfully sold shares in the new
venture and the first issue resumed a month after suspension of operations.

On August 9th, 1887 Rosella Cronk gave birth to her firstborn,  a ten pound baby boy.  George and Roselle lovingly named him Willie.  The joy and promise of new life was not to last, however, as his spirit departed the next day.  Great
joy had turned to great sorrow as the little one was laid to eternal rest in an unmarked grave in the Marvin cemetery.  The event was dutifully reported in the Marvin Monitor and was a harbinger of sorrows to come.

Winter arrived early that year.  The first blizzard came towards the end of November and the town of Marvin and surrounding area experienced a serious coal famine.  Four days after the storm, three railroad carloads of coal reached Marvin and within hours was entirely relieved of its cargo.  But the storm which, in retrospect, has gone down in the history books occurred on January 12th, 1888.  At the time, it was glibly noted as a "right smart spell of weather."  Snow was falling that Thursday morning and by afternoon, it was a cold but pleasant 40 degrees.  Then the wind came out of the north and the temperature began to drop.  In a span of only 16 hours, the temperature dropped 58 degrees.  By Sunday daybreak, the thermometer read 38 degrees below zero, the coldest on record.  Then reports from points further north began to arrive.  235 people lost their lives during the storm.  Most of those were of children who attempted to return home during the storm in Nebraska and the Dakotas.  "The schoolhouse blizzard" of 1888 is the name given the storm to differentiate it from the "The Great Blizzard of 1888"  which hit New York March 11-14.

The effects of the storm in Phillips and surrounding counties in Kansas, were less direct.  No loss of life or of stock was reported.  The winter, in general however, was so harsh that people were huddled together in the confines of their
homes for extended periods of time.  Malaria, typhoid, and scarlet fever ran rampant and claimed many lives.  But the deadliest was diphtheria which was given the name of "Black Death."  One only needs to walk the local cemetery to note the numerous stones with dates ending in 1888.  Many of the coffins in the Marvin cemetery were made by Emma's father who was the local carpenter.

The long awaited spring finally arrived and the hope of new beginnings that came with it, was renewed in the birth of Harry Gibbs Strong on March 3, 1888.


This page is still under construction.